On Tuesday we left the familiarity of London and ventured out to Stratford-upon-Avon, birthplace of William Shakespeare.  Our first train left from Marylebone for Leamington Spa, where we had to quickly cross the platform and catch our connection to Stratford. The English countryside is lovely, and we loved looking out at the green hills and sheep. When we arrived in Stratford, we caught a taxi to our hotel, left our bag, and headed out to the visitor’s center to catch a “hop on/hop off” tour bus.
We started off at The Shakespeare Center, where there is a great exhibit. The best part of the exhibit was seeing an original copy of Shakespeare’s first folio–the first printed version of all of his plays. It was published in 1623, and there are only around 230 still in existence. Actually, a new copy was just discovered quite recently in Scotland. That’s a big deal! Some of Shakespeare’s plays (about 18) were published earlier, but the folio is the only true source for about 20 of them. 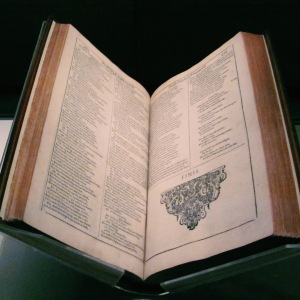 Next, we walked next door to visit Shakespeare’s birthplace. The rooms were small, but I was surprised at how many there were. The house was also used as an inn, and it was amazing to think of how many people shared those little spaces. It’s kind of odd because the house is in the middle of a pedestrian shopping area. Of all the places we visited that were covered with tourists, this was the first place that felt truly “touristy.”

Our next stop was Ann Hathaway’s cottage. This was the home of Shakespeare’s wife before they were married. Famously, Shakespeare left her his “second-best” bed in his will, and you can see what scholars believe to be that very bed upstairs in the cottage. The gardens were lovely, and the house was also very interesting to explore. 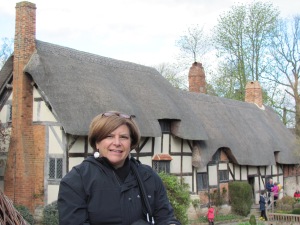 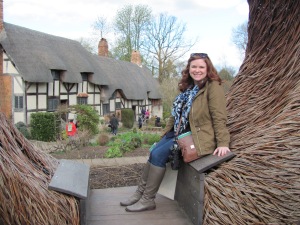 The last stop on our tour was Trinity Church, where Shakespeare is buried. They had a nice exhibit about Shakespeare and the church, and the we got to see his famous tombstone. 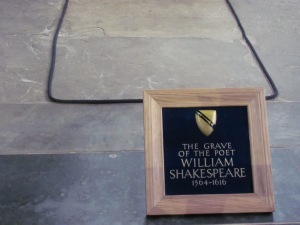 His gravestone carries a curse, which is unusual for any grave inside a church. Trinity church was beautiful, and has been there for over 1,000 years. That seemed to be one of the common themes of our trip–there is so much old, old stuff in the UK. America’s history is incredibly short by comparison.

The church sits right on the bank of the river Avon, so we walked along the river back towards the Royal Shakespeare Company. The RSC has a big presence in Stratford, but also in London as well.

We paused for a while to watch the swans and explore a monument to Shakespeare. Then we walked back to the hotel, freshened up a bit, and went back to the RSC to watch a production of Hamlet.

The show had sort of a Tribal African feel that (in my opinion) made it feel really modern and relevant. The actors were great, and aside from one minor technical difficulty, the whole play ran smoothly.

Check out more about the production we saw here: https://www.rsc.org.uk/hamlet/about-the-play
The next morning we got up early and caught the train to our next destination: Oxford.