When I was a kid, I read a lot of historical fiction geared towards young readers. One subject I remember reading about a lot was the Tudor dynasty–Henry VIII and his six wives. There was one book written from Elizabeth I’s perspective, one from Mary Tudor’s perspective, even one, I believe about Lady Jane Grey. I found this one about Mary Tudor hiding in a box in my storage unit, and it was just too perfect to not share with this post! 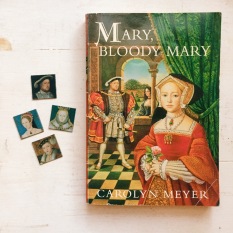 It’s interesting how fascinated we are by the Tudors, even though Henry VIII took the throne 508 years ago. We have bridal shower games devoted to naming all of his wives and mugs that cause the wives to mysteriously disappear as the mug gets hot. We even have countless novels and movies and TV shows devoted to this period of British history. You might have seen some of Philippa Gregory’s books on the shelves–I think she’s written at least two books about every one of Henry’s wives! Her most famous novel, The Other Boleyn Girl, was turned into a movie several years ago, and that’s just fed this flame of Tudor-mania! Here are just a few of today’s interpretations of the Tudors:

Even though the events that are depicted in these books and movies happened 500 years ago, we still love to romanticize the Tudor period. It’s easy to romanticize something so far back in the past because we tend to forget that they used chamber pots and painted their faces with lead. All we see from this side of history are the beautiful gowns, the beautiful women, and the powerful king who will get whatever he wants, no matter who stands in his way. It’s also pretty perfect material for a book, don’t you think? There are so many scheming families, so many legal questions, so many mysterious back room deals that had to happen for Henry to marry six women in his lifetime.

So today, I’ve got two books in this Tudor tradition to share with you–Wolf Hall and Bring up the Bodies, both by Hilary Mantel. These award winning books are the first two in a trilogy about Thomas Cromwell, who was an advisor to Henry VIII. I was interested to read these books because they’re sort of a different take on the whole Tudor era–less about the “romance” and more about the political machinations going on behind the scenes. What I’ve come to realize is that often what we see as “romance” was really just families struggling for power and using their daughters as pawns. This comes through a little in Philippa Gregory’s novels–I’ve read several of them–but there always is an underlying romance to these books that doesn’t seem to appear in Mantel’s books.

I’d describe these books as “slow burn” historical fiction, with the emphasis on historical. I had a hard time keeping all the families straight at first, and Mantel’s writing style is much more artistic than any other historical fiction works I’ve read–like Gregory’s The Other Boleyn Girl. That being said, I think Mantel actually does a better job of capturing what the time period would have been like both aesthetically and politically. There is some crude language throughout the books, and some crude descriptions of what was happening in the English court. But let’s be honest, what Henry VIII did was crude! If you ask me, he fell prey to the pride and power of his position, and he let it influence his family, his court, and his country.

If you’re interested in this time period, but you don’t want to commit to reading the whole series, I’d recommend starting with the second book in the trilogy, Bring up the Bodies. It’s shorter, a little quicker-paced, and it’s about the downfall of the Boleyns. I’ve got about fifty pages left in Bring up the Bodies and the intensity is really picking up. Even though we all know what happened to Anne, Mantel has a great way of building suspense. In contrast, Wolf Hall, the first book, tells the first part of the story–how Henry divorced his first wife and married Anne. Wolf Hall is also almost 600 pages long, so it’s a pretty big time investment!

And if you’re interested in this time period but you don’t have time to read the books, I’ve started watching the BBC show Wolf Hall, which stars Mark Rylance as Cromwell and Damien Lewis as Henry VIII. I’m only two episodes in, and even though the events are condensed, the show is faithful to the books and to the dialogue between the characters. Rylance plays an interesting Cromwell–he’s very mysterious and soft-spoken. The mysterious aspect I see in the novels, but he’s also a little scarier and more morally ambiguous in the books. The show is as slow-burning as the books are, though, so if you’re looking for sword fights and romance, look elsewhere. You see very little of Anne Boleyn and Henry VIII in the show! I did read, however, that this show combines the events in both novels–so it’s like getting a two for one deal!

Have you read anything about the Tudors? Where should I go next from here–more history? More historical fiction?

Let me know in the comments below!