In 2015 I read Andy Weir’s bestselling debut novel, The Martian, and later that year the film starring Matt Damon came out. I loved the novel and the movie, so I was excited when Weir’s second novel, Artemis, came out in November. I used an Audible credit to download the audio performed by Rosario Dawson. 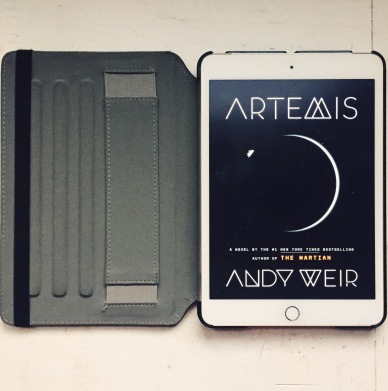 What I loved about The Martian was the believable science fiction mixed with the humor of the narrator. I was hopeful that these traits would also be present in Artemis. This novel is different from The Martian in a lot of ways. Most notably, the story is set in a society on the moon, and there’s not really a survival aspect to the protagonist’s journey like there is in The Martian. The story follows a woman named Jazz, who is a smuggler. Jazz has always lived in Artemis, the first settlement on the moon, and when she unknowingly stumbles into a plot that threatens the entire lunar society, things escalate quickly.

The plot of this novel kept my attention, and I wanted to keep listening to find out how the story ended, but that’s where my positive comments end. I didn’t connect with the main character at all, there seemed to be a lot of excessive language, and I didn’t really understand all of the political machinations at work on Artemis. I read an article that Jazz was originally a secondary character who became the protagonist, but she still felt flat and underdeveloped to me. All in all, I was pretty disappointed with Weir’s sophomore novel. The one redeeming quality is the action and suspense. Weir is really good at getting you to see all of these technologies that are futuristic or far-fetched.

Other than that, I’d say skip this one unless you get it for free from the local library!