“Summer afternoon—summer afternoon; to me those have always been the two most beautiful words in the English language.”
–Henry James

Well, I hate to say it, but there aren’t that many summer afternoons left before the school year rolls around again. And while I’m always excited for a fresh start in August, I do hate to see the summer months fly by so fast. 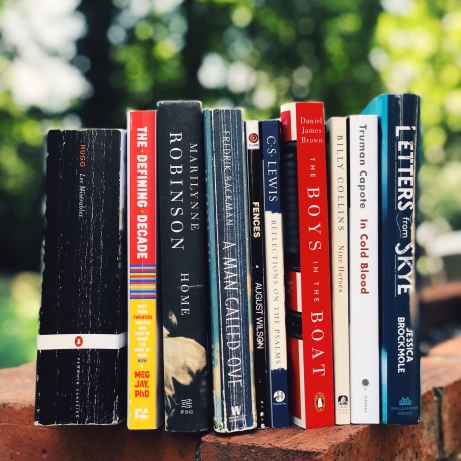 This summer most of my time was spent preparing for the new school year–I’ll be teaching all new classes in the fall, as well as one section of composition at Kennesaw State, so lesson planning and summer reading have been occupying my mind for the last eight weeks. That’s one reason why the blog has been pretty quiet–a lot of my mental energy has been going towards prepping for the year!

That being said, this has been a good summer for reading. I managed to finish sixteen books in the months of May, June, and July; I’m hoping to squeeze in at least one or two more before school actually starts on August sixth. For once in my life I’m ahead of schedule on my reading goal, but I know that won’t last long! 🙂

I’m planning some full-length reviews of a few of these titles, but for today I thought I’d break those sixteen books down into different categories and say a tiny bit about each as a sort of “rapid-fire” review.

Five stars, no questions. Jim Dale does a spectacular job narrating these books. I finished volumes two, three, and four this summer, and I’m listening to number five right now. If you’re a Harry Potter fan, these are worth the investment. I’m convinced they’ll help you hear the stories in new ways!

Radium Girls is fascinating and absolutely unbelievable at times, but it does drag quite a bit in the middle, so Audible might be a good option for that. I also found the narrator for that book reads SO SLOWLY. I was able to listen at 1.5-2.0x the speed. You can read my original review here.

If you’ve been around the blog for a while, you know I love The Boys in the Boat with all my heart, and listening to it didn’t change that one bit. I was still captivated, and I loved that the narrator was Edward Herrmann–Richard Gilmore, for any Gilmore Girls fans in the house.

In Cold Blood was new for me, and I enjoyed Capote’s detailed writing style. The murders he describes were so brutal that they hardly seem real, but the story was gripping and interesting to read.

The fiction requirement for American Lit was The Scarlet Letter, which I hadn’t read since my own American Lit class in eleventh grade. The story drew me in eventually, but I sometimes find Hawthorne’s writing style exhausting. I had forgotten a lot of the details of the story, and I was glad for the chance to re-read it!

For my British Lit students, the nonfiction requirement was The Man-Eaters of Tsavo by John Henry Patterson. This true story about man-eating lions was intriguing, and it reminded me of an H. Rider Haggard story. It was also ironic that about the time I was reading it a pride of lions in South Africa ate a team of suspected poachers! It’s also a glimpse into British Imperialism from the British side of things, so Patterson’s cultural insights are a little one-sided and definitely products of the time in which they were written.

The fiction options for my British Lit students were Brave New World by Aldous Huxley, The Time Machine by H.G. Wells, and Till We Have Faces by C.S. Lewis. I read Brave New World in 12th grade, and I will say that I appreciated the novel much more this time around. I’d also read Till We Have Faces many moons ago, and I know for a fact that I was too young to understand half of what was going on in that book when I read it the first time. If you’re a C.S. Lewis fan, I’d recommend it highly. The Time Machine is short and strange, but if you like early science-fiction, it should be on your list.

Below I’ve listed the other books that weren’t school-related. I’m planning on writing full-length reviews of these in the coming weeks, so I won’t spoil them now. Suffice it to say that I enjoyed all of them!

And with that, Summer comes to a close! What books did you finish this Summer? What books are on your TBR list as we head into the new school year? I’d love to know.

And if you aren’t following along over on Instagram, now would be a great time to start. I’m giving away three of the books I mentioned in this post. You can find all the details here.

1 thought on “What I Read This Summer: Rapid Reviews”