This month’s theme for our 12-month reading challenge is “Lazy Days,” but for me the month of August is anything but lazy! I picked this theme to focus in on one of my new favorite ways of discovering great stories: audiobooks.

With school starting back, there’s no way I’ll be able to read as many print books as I was able to over the summer. That means I’ll be relying more on audiobooks during my commute. And though the theme includes the word “lazy,” don’t take that to mean that reading audiobooks is somehow less intellectual or important than reading print books. Sometimes I’ve found that certain books take on new meanings or become more alive when read by an extra-special narrator. These are just books that are easy to sneak in on your busiest (or your laziest) days. 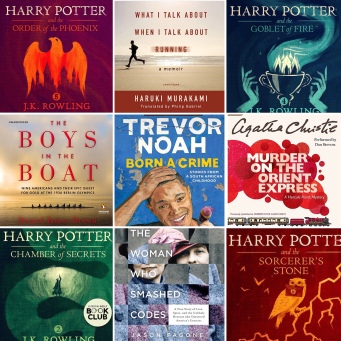 Audiobooks for Adventure and Escape

As a side note, I should say that I’m a huge fan of my Audible membership, but I know it’s not for everyone. If you’re on the fence, here is a list of pros and cons for you!

Many of these audiobooks I’ve mentioned here before, but never all in one spot. I hope it’s been helpful to read about some of the audio titles I’ve enjoyed the most! Where should I turn next? I’d love to read your recommendations.